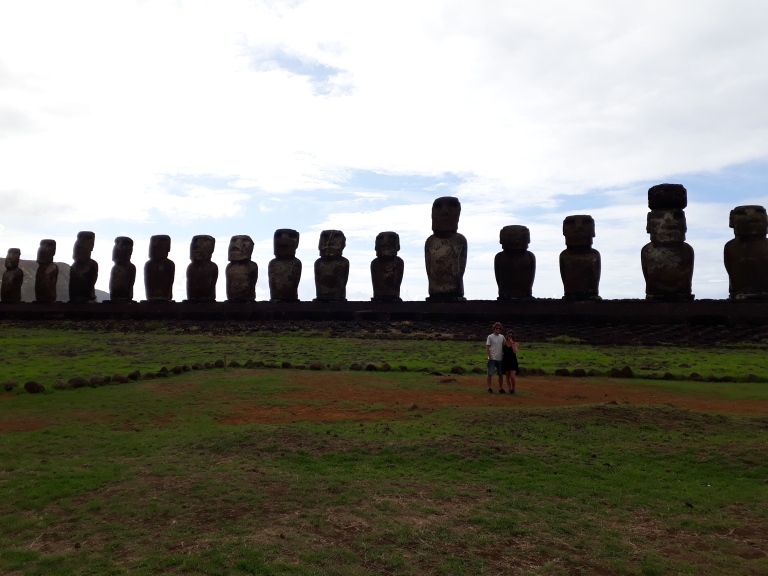 Easter Island is one of the most remote islands in the world and a dream destination for many. A mysterious history, beautiful untouched landscapes, art, culture and plenty to discover, this island ticks all the boxes…so let’s find out more!

All you need to know in 90 seconds

Where is Easter Island?

Easter Island is a volcanic island that marks the southeastern corner of the Polynesian triangle in the middle of the Pacific Ocean and it is part of Chile.

Easter Island is the first place on the United Nations’ Isolation Index and the most secluded inhabited island in the world. Chile is the closest country to this place and it is still 3,800 km off its coast.

Easter Island is also known with other names, like Isla de Pascua or Rapa Nui. Generally speaking, only tourists use the name Easter Island, while local people use the name Rapa Nui and like it when visitors use the same name.*

So, how did the island get its name? On Easter Sunday 1722, Jacob Roggeveen, a Dutch admiral, arrived on this isolated Polynesian island. He was the first European person to ever land here and named it Paasch-Eyland – Dutch for ‘Easter Island’.

The A Vere moai, known as the traveling moai, in Tongariki on Easter Island.

There are also some discussions on whether the name Rapa Nui is the island’s original name or not, as same think that this name was given by a Peruvian trading enslaved people who compared this island to the Rapa Island in French Polynesia.

Another name the island is know with – which is probably the very first name of the island – is Te Pito te Henua that translates into the Navel of the World.

*I will be using the name Easter Island too in some of my posts, just because most people look for this name online rather than Rapa Nui.

How do I get there?

The only way to get there is to fly from Santiago in Chile and it will take approximately 5 hours. The only company that flies there is LATAM, which is very good.

While everything went perfect on the way day, we experienced a two hour delay on the way back, but we found out this is pretty normal due to very strong winds.

Alternatives include flying from Pape’ete (Tahiti) in French Polynesia, which would take 7 hours, getting there with a cruise, or getting the Aquiles, a boat that belongs to the Chilean Navy. The Aquiles departs only twice a year to Easter Island and it takes 7 days to get there, and it almost always is reserved by Navy officials. So overall, the best option it to fly there.

When should I go?

Like I said here, Easter Island is a year round destination. December through February/March are the summer month and so it high season for travelling here. This means that prices are higher and there are many tourists. Even though – because of price and location – not many people visit Easter Island, you would notice the crowds as it is such a small island.

The best time to visit Rapa Nui is either side of the high season, when you can expect temperatures around 20°C to 24°C, prices are lower and you won’t overcrowd the island.

April and May are the rainiest months of the year. We visited the Island the last few days of March and start of April and we got a few showers during our stay, but the weather was okay overall.

How much does it cost?

One of the reasons why people don’t visit Easter Island is because they think it’s going to be an expensive trip. But it doesn’t need to be.

The main expense will be flights to get to the island. LATAM is the only company that flies there and, while prices can get up to €1,000 return for flights from Santiago, the price considerably drops outside the high season.

Like I said above, we visited Easter Island between the end of March and start of April, which end of the high season and start of the rainy season and we got our flights for €350 return, even though we only book them 5 days in advance!

We were very lucky – I know! – but we were travelling without a plan and so this worked out perfectly for us. However, you could set up an alert on the LATAM website and get notified about prices and try to book them in advance to make sure you get the best fare.

Can you swim in Easter Island?

Yes! You can swim in different parts of Easter Island all year around.

Where to swim on Easter Island

Moai are the famous giant head statues that are the symbol of Easter Island. You can fin them everywhere on the island and there are lots of stories and legends around them, although their origin is still a mystery.

Most people think that these statues only have heads, but they also have bodies that in some cases are hidden in the ground and in some cases are visible. see the famous photo of the Moai buried neck-deep at Rano Raraku quarry before arriving on the island and are surprised to know that the statues also have torsos or bodies.

The Moais are protected by law because they are deteriorating at a fast pace as due to their geographical position they are exposed to string winds and sea water. Tourist activities accelerate this process too. So, while you can take pictures of the statues from a distance, it’s forbidden to get close or touch the Moais. If you break this law, or damage one of the statues, you could get a big fine up to 20,000 USD.